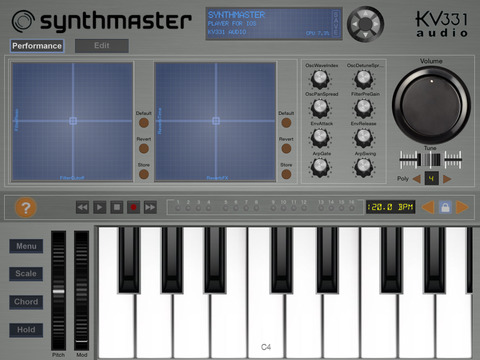 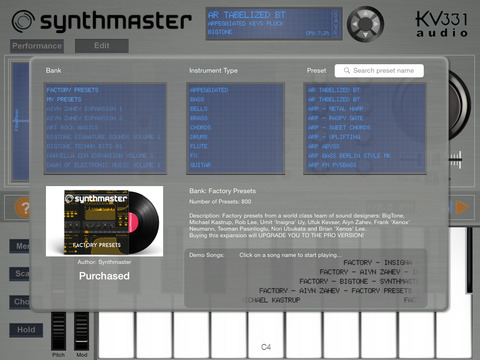 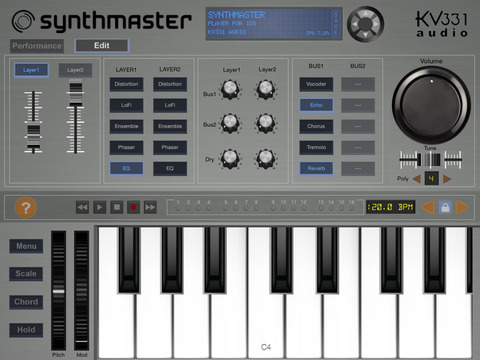 “SynthMaster: The most powerful softsynth you may not have heard of” Keyboard Magazine

“If ever there was a desert island synth, SynthMaster is it, covering all sonic bases with authority and a superb tone” Computer Music Magazine

“Many developers say that they’ve produced the one and only synth you’ll ever need, but we’ve always felt that was a dubious claim. In SynthMaster’s case, though, it’s one that rings true” MusicRadar

SynthMaster Player for iPad is the mobile player version the award winning SynthMaster software synthesizer.
It is targeted towards users who prefer to use presets rather than designing their own sounds during music production. Although it is a preset based player, users can edit the following preset parameters:

After completing registration, users can upgrade to the Pro version of the app by purchasing the “Factory Presets” bank via In-App-Purchase (IAP). With the Pro Upgrade all of the 800 factory presets are loaded and also the following features are unlocked:

The built-in 2 octave keyboard with pitch and modulation wheels lets users play notes without having to connect an external MIDI controller to their iPad. With its Scale functionality, it shows the users the notes on the scale, and with its Chord functionality the user can play a certain chord by pressing a single note.

SynthMaster Player for iPad acts as an source/instrument in InterApp Audio. We demonstrate in our user manual how to connect it to InterApp enabled DAW apps.

SynthMaster Player for iPad acts as a source/instrument in AudioBus, with state saving enabled. We demonstrate in our user manual how to connect it to AudioBus enabled DAW apps.